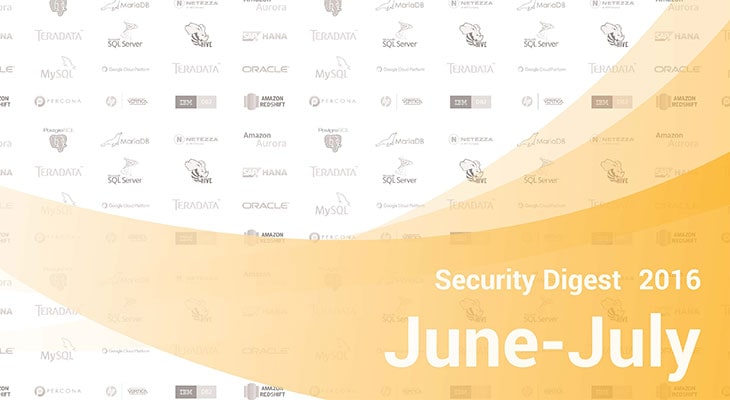 According to latest IBM Security report released this June, the average cost of a data breach hit $4 million, representing an increase for 29% since 2013. Every lost or stolen record costs for corporations approximately $158. There is also a dismal 64% increase in reported security incidents. Results of the report imply that cyber-attacks are improving and getting hacked becomes more expensive, which reminds the importance of being up-to-date when it comes to information security. Here is the digest of recently released DBMS updates and information about most important fixed vulnerabilities.

Oracle continues to extend the sphere of its influence by reaching a $9.3 billion worth agreement to acquire NetSuite, which is a company that sells a group of software services used to manage business’s operations and customers relations for more than 30,000 organizations. Right before the huge bargain announcement Oracle has released next scheduled Critical Patch Update surpassing its previous unwanted record for the number of security fixes by troubleshooting 27.6 problems across various products, including Oracle Database Server and Oracle MySQL.

As for the other Oracle products nineteen fixed vulnerabilities across nine different products have a rating of 9.8 by CVSS 3.0, with this in mind, for many users it will be essential to install the patch.

MySQL 5.7.13 has been officially released in June. The new version of MySQL Server has an SQL interface for keyring key management, it is implemented as a set of user-defined functions (UDFs) that access the functions provided by the internal keyring service.Here are security vulnerabilities fixed in the new version:

Integer overflow in the EVP_EncryptUpdate function in crypto/evp/evp_enc.c in OpenSSL before 1.0.1t and 1.0.2 before 1.0.2h allows remote attackers to cause a denial of service (heap memory corruption) via a large amount of data.

Integer overflow in the EVP_EncodeUpdate function in crypto/evp/encode.c in OpenSSL before 1.0.1t and 1.0.2 before 1.0.2h allows remote attackers to cause a denial of service (heap memory corruption) via a large amount of binary data.

The asn1_d2i_read_bio function in crypto/asn1/a_d2i_fp.c in the ASN.1 BIO implementation in OpenSSL before 1.0.1t and 1.0.2 before 1.0.2h allows remote attackers to cause a denial of service (memory consumption) via a short invalid encoding.

The AES-NI implementation in OpenSSL before 1.0.1t and 1.0.2 before 1.0.2h does not consider memory allocation during a certain padding check, which allows remote attackers to obtain sensitive cleartext information via a padding-oracle attack against an AES CBC session, NOTE: this vulnerability exists because of an incorrect fix for CVE-2013-0169.

The X509_NAME_oneline function in crypto/x509/x509_obj.c in OpenSSL before 1.0.1t and 1.0.2 before 1.0.2h allows remote attackers to obtain sensitive information from process stack memory or cause a denial of service (buffer over-read) via crafted EBCDIC ASN.1 data.